Being at home for the past few months has been amazing – a dynamic mix of famiy, friends and all things familiar. It has been a chance to learn new skills, work, and catch up with the people I love most in the world.
But when the winter months came, Christmas had passed and the weather turned to classic British drizzle, it was the perfect time to set off on another adventure.

This time, a little different to any I have done before…in a van! 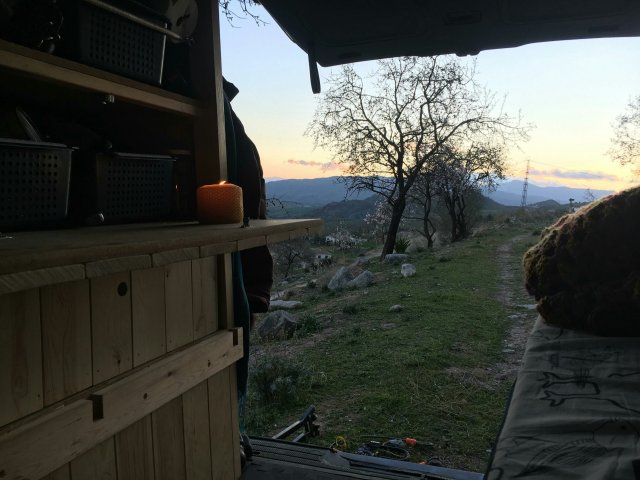 Morning Coffee in the Van

You see, it was at the end of last summer that life decided to throw a curve ball my way, in the form of a ginger-haired gardener called Ben. He happens to be a fellow cycle tourer, traveller and adventurer. He also happens to have a van and for the past few months we have been kitting it out ready to live in for a month. After all, what better way to cement our relationship (or test its limits perhaps?!).

Despite two trips to the garage the day before we left, and four speed camera flashes on route (somewhat stressful!), we finally made it down to the south of Spain. We began our trip cycling round the stunning city of Granada, visiting the incredible Alhambra and tasting some of the free tapas treats that are served with every beer.

The trip continued on an upward curve when we headed into the mountains of Sierra Nevada for a few days of skiing.

Parking up on the side of one of the streets of the resort, van life started to come into its own. The panoramic views of the mountains surrounded us and we watched the sun set through the van door each evening. Despite rumours of being unable to park up for free in the town we found it easy to, rolling out of bed and onto the piste each morning.

I didn’t think it could get much better but for the last week we have been camping and climbing in and around El Chorro, El Torcal and Valle del Abdalajis.

At the foot of the crag at Valle del Abdalajis

Van life is, of course, cramped at times, but to Ben and I, who are used to wild-tent-camping it still feels very luxurious. We have found routines that work for us and the space, as we live in it, continues to change to what we need as and when we need it.

At times, the van has felt more stressful than enjoyable (like the 3 days of driving it took us to get down here…or the 4 speed camera flashes on route…or that time we meandered through the small town of Alora, lost in ever steepening, narrowing roads and tighter corners…just hoping we wouldn’t hit a dead end…) For the most part though, it has given us the most amazing way to see the south of Spain and allowing us to bring all the gear we need to have lots of fun and adventures along the way.

Now, we are headed toward Ronda, a white washed village in the south of Spain famous for its bridges, wild swim spots and mountains.

Life on the road is pretty good. 🙂