Well, we successfully collected our bikes from Turpan station on Saturday afternoon and spent the next few hours sorting out our gear and attempting to repack it all into our panniers. This proved somewhat difficult, as with only two rear panniers, a handlebar bag and an additional rucksack strapped on top of the pannier rack each, space for all our winter essentials is minimal.

Eventually we set off; I, with my assortment of extra bags strapped and tied onto my pannier rack in a somewhat chaotic, but fully functional manner; Arron on the other hand, with everything neatly in its place as he had carefully planned out in the weeks before. My packing, though much improved now from that first day, still torments Arron; he describes it as like “one of those crazy Asian motorbikes crammed with everything they need to move house!” He has a point…after all, I am carrying everything I need to survive for the next few months, bar food and water.

Truth be told, we both have more stuff than space, and Arron’s panniers have been left open to the elements for the day, as, reluctant to give into my bag-lady approach, he has been stuffing his panniers too full to close!

Little did we know when we finally set off, fully packed, on that first day that our estimated 3 or 4 day journey to Urumqi would actually take us six…
Instead, we left Turpan station in high spirits, anticipating the adventure to come. At last, we were on our way, and it felt great to be cycling along the dirt road that ran beside the highway. After a few kilometres we were told by a random man on a motorbike that we were not allowed to continue, and would have to make our way back onto the highway. It was at the precise moment that we joined the main road that my pedal decided to spin off and fly across it. Thankfully it didn’t get run over by the oncoming trucks, and neither did we, and soon we were back on our way.

Water sources are reasonably infrequent along our planned route, once every 20-40km, so, after an hour of cycling, and with only an hour or so of light left (yes, we had set off rather late in the day…) we decided to camp when we came across our first water source; a frozen river. 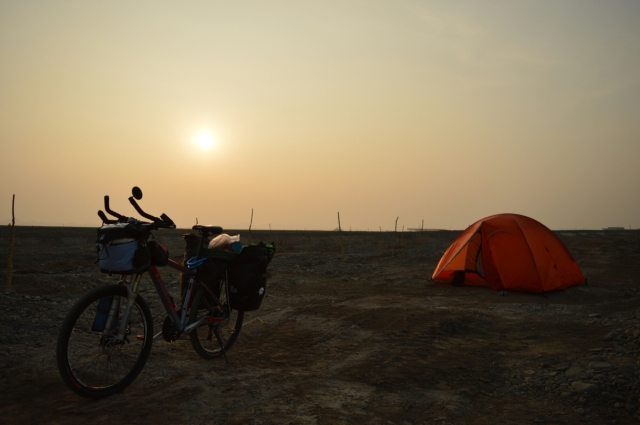 It was our first night, and we proceeded to do almost everything wrong, though we did not realise this at the time. We stripped off down to our baselayers to let the sweat dry. Then we both went to collect ice. we set up just one stove, with no protection, on which to boil the ice. Then we both set up our own tents. Then we cooked our food, outside, in the beautiful new landscape, all the while getting a little colder, though by this point fully layered up again. Then we ate outside. Then we retreated into my tent for a cup of tea. Then, quickly realising how cold a night alone in a spacious 2-man tent in -15 degrees Celsius would be, I moved out of my tent and into Arron’s. By the time I went to sleep I was already freezing cold and so was the tent. Despite my lovely warm sleeping bag, I continued to feel the cold all night, and into the morning.

Luckily, the next day started better. We cooked breakfast inside the porch of the tent, on a stove with a newly built stone wall around it to keep the heat in. We ate a two course meal of egg and tomato broth with flatbread followed by mashed hot bananas with peanut butter, all served with a side of coffee. After that breakfast, I was ready for anything.

We packed everything down, boiled up enough ice to fill all of our flasks and at 10am, four hours after waking up, we were ready to go. I would like to say we have got faster at this, but I’m not sure we have….

Our first full day of cycling was a mixed bag. For a while it was glorious; the sun was out, the road quiet and the landscape phenomenal. The landscape here is almost desert-like, vast, dry and empty plains, brown and dusty and flat. It’s quite unlike anywhere I have ever cycled before. For the first hour, it’s interesting. Then it is just really boring.

Then I started to notice just how busy the road had gotten, with large trucks hurtling past us with inches to spare. It was unpleasantly similar to some of the roads I had cycled on in Europe, and by mid-afternoon, I was getting tired of it. We pulled over, and I told Arron in no uncertain terms that, if this was it for the next few weeks, I was out!

It turns out I was just feeling a little hangry!

We had decided that, with the cold, it would make sense to have a good breakfast and dinner, and skip lunch in favour of snacks of dates and peanuts on route. I did this on my last cycle trip and it worked, but it has been a long time since my body has had to cope without proper food throughout the day, and I was really feeling it! Since then we have included bread in our snacks throughout the day, and these extra calories have ensured I have had no more low points…. 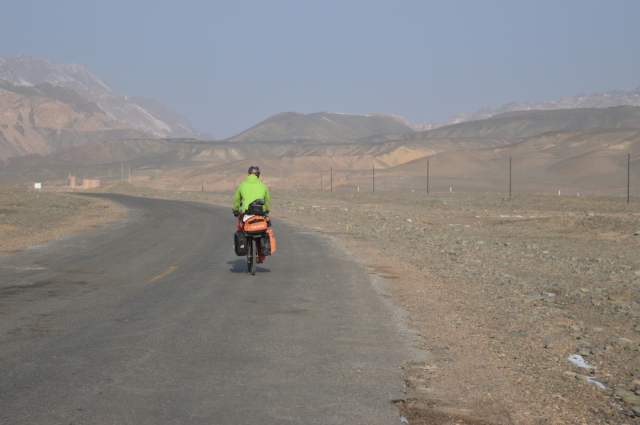 By the tiime we arrived at our second camp we had a plan, and were immediately more efficient. While Arron set up one tent, I prepared our food. Then, when everything was ready inside the tent, we built another little stone fortress around our stove inside one of the porches, and cooked, then ate, inside the tent. Unlike my frst night, I forced myself to change into a completely new set of thermals, before replacing all my warm outer layers. Thankfully, my second night’s sleep was much better than my first. I was warm all night, despite temperatures outside of around -20.

Our second full day of cycling, though cold, was stunning. We followed a wide, meandering river, still flowing even in these temperatures, as it weaved it’s way through the mountains. The mountains were enormous, snow covered and, in the clear blue of the day, beautiful. We had long since left the main road that had frustrated me the day before, and were now following an old road that was practically deserted. It could not have been better!

Little did I know…it was all about to change!

The Edge of the Mountain Pass

This entry was posted in China, China to UK by Bicycle and tagged camping, cycle, touring, Turpan, Urumqi, winter, Xinjiang. Bookmark the permalink.