And so it begins…or does it?

Our first week on the road has been less road-like, and more hotel-room-and-train-cabin-like.

We knew there would be some waiting around before we began our journey, it was always inevitable. We had to get visas for China and Russia before we set of. For the latter, this meant hanging around in Hong Kong until 9th January just to submit our visa application, as Russian Christmas holidays extend far into the first month of the year.

In the end this actually worked to our favour, as we were unable to book train tickets from Guangzhou to Turpan until 18th January anyway, unless of course we wanted to spend the 48hours on board standing… Safe to say we opted for the slightly more expensive, but infinitely more comfortable option of a bed for the journey.

Everything went unbelievably smoothly, perhaps too smoothly, until stage 8: collect our bikes. We managed to get off the train at 6am in Turpan, but it seems our bikes did not. Instead, they continued their journey, complete with 1,500 other bits of luggage checked onto the train, to Urumqi, 300km away.

Xinjiang, the province we are now in, is a strange place. It is more than 3,000km west of Beijing, and yet, it has the same time zone. Years ago, in an effort to unite China, Beijing enforced a single, national timezone. Of course, this makes sense in many ways, except that now, in the heart of winter, the sun does not appear until here around 9.30am!

So we turned up at 6am in Turpan station, except it felt more like 4am and it was -11degrees Celsius. We wandered around looking for the correct office to collect our luggage, and bicycles, from until the cold got too much for us and we crept into the brightly lit, and toasty warm ticket office.

It being China, we were of course frisked on entry by the security guard and our butter knife (that Arron accidentally brought along for the ride), was confiscated. It was surprsingly then later returned when we explained that we were not taking a train but looking for our luggage.

We were told that we would have to wait a couple more hours (no-one knew exactly how long) for the luggage office to open. In the meantime we were offered a lovely, warm corner to wait in! We were grateful for the kindness, and I, having experienced some very strict Chinese officials in the past, was somewhat surprised by it. We brewed coffee and noodles and ate our breakfast while we waited.

After a time, the same lady who had frisked us, confiscated the knife and returned it, came over with a big smile, “It’s open, it’s open, you can go now,” she said pointing to Arron, and pointing to me, she said, “You stay.”

Arron returned just a few moments later looking completely bemused, so we set off to the office together.

I cannot speak Mandarin, but have managed to pick up a few useful phrases along the way. Now it seemed was my opportunity to practice them.

I managed to deduce that our bicycles were not here, but somewhere else, but they would be here later today. But there was a lot in between all that I couldn’t work out, so in the end, he called for help.

A smartly dressed official (in shirt and tie in these temperatures!!) turned up and managed to translate for us. This was the moment we discovered our bicycles had begun their journey home without us, and were 300km further west in Urumqi.

So now we wait.
And hope!

In the meantime, we are in Turpan, which is a beautiful. Understandably, given the chill in the air, it is off season here, and as such, every hostel and cheap hotel we turned up at is closed. Thankfully, we found somewhere at 3.30pm, and didn’t have to suffer a night in the cold with no sleeping bag or tent!

We have eaten delicious flat bread baked inside conical fire ovens, crsipy dumplings and baked sweet potato, and are left to contemplate the wisdom of sending over two grands (GBP) worth of stuff across China for a measly 87 quai (about a tenner). 🙂

Luckily we still have faith, and a big smile on our face, so let’s hope they turn up today, and we can, finally, begin! 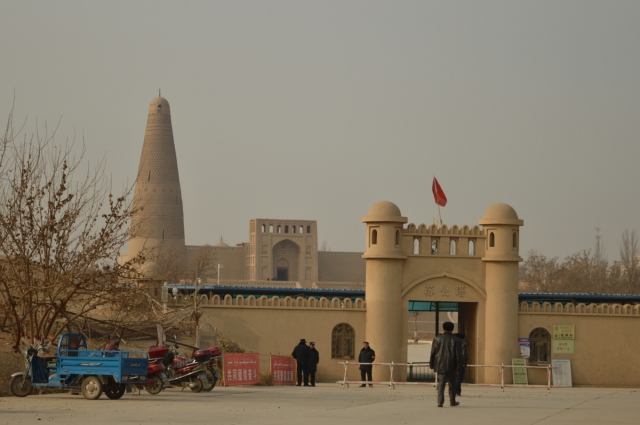 Emin Minaret, Turpan, in the afternoon

This entry was posted in China, China to UK by Bicycle and tagged bicycle, touring, train. Bookmark the permalink.