Feeling thoroughly refreshed after our amazing night in the grandest hotel yet, we set off on our penultimate day in high spirits. As was becoming regular tradition we sat and ate barbequed pork on rice with pickled veg for breakfast outside a small street food stall before heading off on our bicycles.

As we cycled out of the town, it was obvious that Sra Aem was a rapidly changing place, with new hotels and resorts being built all around the edge of town, obviously anticipating a growing tourism industry.

Once more the cycling was mostly flat, with only a few gentle uphills and downhills along the way. We passed through another military looking village but thankfully the military zone was significantly smaller than the day before.

About halfway through the ride, around mid-morning, we passed by a little café that was called “Happy Coffee”. Having gone without coffee for a few days now, we were immediately tempted in by such promises. However, when we asked hopefully for a coffee each, the girl working simply shook her head, smiling the whole time. We settled for fresh coconuts instead which really isn’t much of a hardship!

We arrived in Anlong Veng around lunchtime again, and, as always, headed straight for food! Unlike all the other places we had been or stayed, we actually spotted our first other white person here! What a change!

With full stomachs we went in search of accommodation and once more had a choice of several. We stayed in our best hotel yet, and this time we even got air conditioning!! It was also the most expensive, at $15 for the room for a night, but, feeling exhausted and with a 135km day ahead of us, we opted to treat ourselves, in the hope that a good night’s sleep would set us up for the final, and longest day.

As we wandered round the town in the afternoon we happened upon a small supermarket (the first one of these we had seen since leaving Siem Reap) that also served coffee. After our earlier disappointment we headed straight in, and this time were each served a steaming hot cup of (fresh!) coffee. We sat on beautiful teak wood furniture, next to the aisles of the supermarket and even enjoyed free WiFi!

It seems we were not the only ones enjoying the free WiFi as the only other people in the shop were army officials, of which there were plenty! We found out later that the Prime Minister of Cambodia was visiting Anlong Veng for fifteen minutes that afternoon, and as such the town was on high alert, with plenty of armed guards around to keep the peace.

We were happily chatting away discussing our plans for the following day’s cycle ride, and preparations needed in the morning before we left, of which the most important for both of us was relieving our bowels.

It was only later that we found out the Khmer gentleman sitting next to us actually spoke perfect English, and had heard and understood every word we had said!

Thankfully he was not too put off by our crude discussion and after some small talk, invited us to join him that evening, as he volunteered teaching English at a local school. 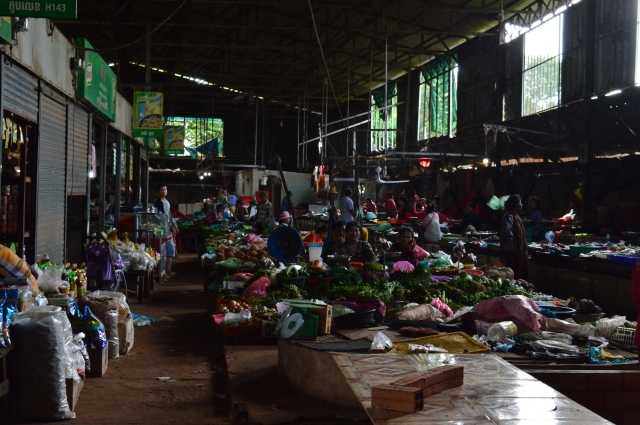 Anlong Veng Market – One of many we visited on our tour!

We of course accepted, and after a quick trip to the market to stock up on snacks for the next day, we accepted a lift on the back of a motorbike (threes up) and made our way to the school.

It was not quite what we had expected when he had invited us to join him teaching English (although I have learnt this is often the case in Asia!). Instead of a classroom, we all sat outside on long trestle tables. The students took it in turns to ask us questions in English, to which we replied, and then we joined them for a delicious meal of noodles and a party.

Thankfully we both managed to avoid the singing, but we fully embraced the dancing. They, of course, had a huge amp and were playing Cambodian songs at top volume. We were completely sober and it was only 6pm but we danced as if we’d been drinking all night and it was the early hours…!

We had a lot of fun, learnt a lot of new dance moves (Khmer style!) and still managed to be in bed and asleep by 8pm! Gotta love partying South-East-Asian style! J