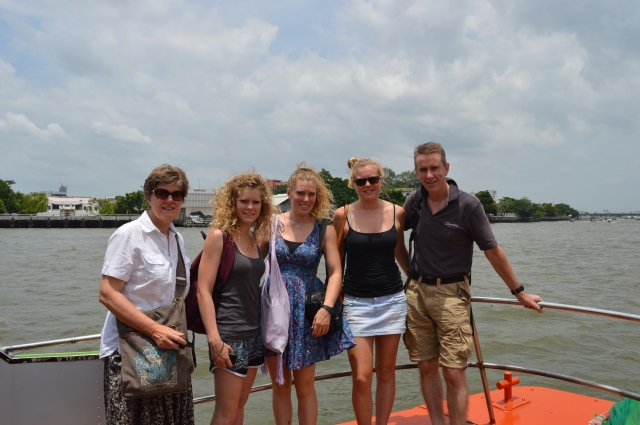 On the “Tourist Boat” in Bangkok

It had been almost a year since we had all been together as a family when I went to greet my parents and two sisters in Bangkok airport a few weeks ago.

We had an amazing two weeks together, and felt like a real treat of a holiday.

Our first day was spent relaxing and cycling around Chiang Mai. We hired bicycles from the lovely lady opposite the Mickey Cafe (for anyone who might know her – she is awesome and popular amongst travellers). She is always smiling and, having hired a bike from her almost every day during the week before, she was incredibly happy to meet my family!

I had bought too many dragon fruits from a man on our way back to drop the bikes off, pushing his wares around in a trailer, and I gave a couple to her. She gave me a huge bunch of longan fruit in return. I think we got the better deal, as the longans were definitely more delicious than the dragon fruit!

Special kudos has to be given to my Mum here. The ringroad around the moat in Chiang Mai is not the most user-friendly. It is fairly chaotic with motorbikes, cars, tuktuks and red trucks. But my Mum, who is not a big cyclist, gamely followed me as I took everyone on it! At least we were going with the traffic and not against it as I might have done on my own…!

The following day we decided to hike up to the top of Doi Suthep, to visit the temple at the top. It was a beautiful hike through a narrow trail in the jungle, and although we were only ten kilometres or so from the centre of Chiang Mai, it felt like we were miles away. The trail itself was almost entirely deserted on our way up (something my sister Jen found a little disconcerting given the amount of wildlife – in the form of spiders – around).

It was a bit of a shock when we emerged at the top of our hike to find a total tourist trap. We still enjoyed looking around the temple, it is beautiful and it does have excellent views across Chiang Mai, and we were grateful for a ride down the mountain in a red truck.

After a good rest day when we learnt how to cook some tasty Thai food at a local cooking class, we hiked some more. This time, we took a tour. We drove an hour into the hills north of Chiang Mai to the Si Lanna National Park where we spent the rest of the day hiking up into the mountains. Thought it was not particularly difficult hiking, the humidity and the heat made the climb tiring work!

We arrived at a beautiful village on the top of a 1000m+ peak in the early evening. We took it in turns to use the squat loo and bucket shower before an evening of good food, beer and card games .

The following day we hiked back down the mountain via a beautiful waterfall and plunge pool. Jumping into the surprisingly cool water made for a refreshing break. In the afternoon we took a bamboo raft down the river, which despite my scorn of them in China, was actually a very relaxing and enjoyable way to see the view from the river!

However, the highlight of the trek has to be the ending, when we were feeding and bathing elephants. Being so close to such beautiful animals was humbling indeed, and despite all the confusing animal rights publicity around the elephants in Thailand, the animals did seem happy at the centre we went to.

We also managed to freak ourselves for an afternoon at the Insect Museum in Chiang Mai which has an extensive display of creepy crawlies that you could end up sharing a bed with. We purposefully went after the trek was over, and not before!

Our time in Chiang Mai was rounded off with a brilliant afternoon at The Grand Canyon in Chiang Mai. This is an old quarry that is now filled with water (32m deep!!) where you can jump in from ever increaing heights. In fact I prefer to get the highest one over first so that I don’t think about it too much and bottle it! Its a great way to spend a sunny afternoon, and at 50 baht (£1) per person, is a bargain too!

Our final few days were spent in Bangkok. We were, it later turned out, conned into taking a tuktuk ride to a random temple on the edge of town before we were later dropped off at a rather expensive tailors. It didn’t matter though. It cost 30baht (65p) and an hour of our time, and I at least got to practice my Thai!

The highlight of Bangkok for me was without doubt the Sky Bar at the top of the State Tower. Unfortunately we were turned away at first, because Fi, Dad and I were in flipflops. It turns out the dress code for the Sky Bar is more strict than I had realised! Luckily, as we walked away, we were directed by a policeman to a local lady hiring smart shoes out to those of us silly enough not to turn up in appropriate ones for the Sky Bar.

It turns out her husband is the policeman, which is why she is allowed to do what she does.  After an hour or so on the top of the tower in our hired smart shoes, admiring the views and drinking our delicious expensive drinks, we returned to collect our shoes from the local police box, where they had been stored. My shoes have never been in such safe hands!

It was an amazing two weeks together after so long apart, and I was so happy to be able to share a little of what I have experienced in the months since I have left the UK with my family! Thanks for coming guys, love you lots!

This entry was posted in Adventures, Southeast Asia. Bookmark the permalink.