I am leaving on Saturday and I am not getting a leaving party from my school, as they would normally do, because everybody is busy with exams and a multitude of other jobs. Having seen what a show Thai people put on, I am somewhat relieved to be able to slip away. However it seems my last two weeks are already shaping up to be pretty busy and I’m not sure even I would be time for a leaving do even if I did want one…

I have been to Mae Hong Son for a weekend, where Maddy and I walked up to the temple on the hill, enjoyed the views, then ran the 5k or so up the next morning. A beautiful weekend.

I have been to the funeral and cremation of a prestigious local Monk. I met my second ever farang in the village at the cremation (he was a photographer and an American visiting the family of a Karen friend of his now living in the states) and my third later at the wedding (he has married a local girl). 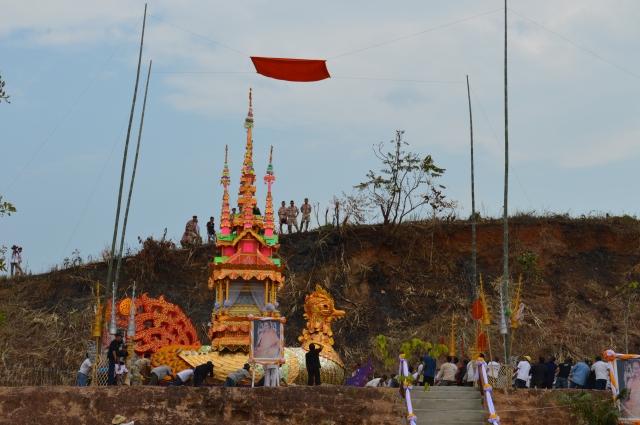 We have had Karaoke with the TV remote in the living room at Sinuan’s. I have drunk on more than one occasion, despite my best efforts not to. It is hard to refuse when Thai people can be so insistent and it seems to be culturally insensitive to decline food or drink that is offered to you.

Lipo singing his heart out!

I ended up drinking with teachers from the school a couple of times, once at another little bar down the road from Sinuan’s, a very fun evening with some very entertaining people. Two nights later I found myself with another teacher and his friends at Sinuan’s. He bought alcohol from the next door shop as I was locked out at the time (Sinuan had gone for crepes with the kids – it took two hours!). Despite feeling ill and wanting nothing more than my bed I was glad of the company, especially when so many locals come and go looking to buy whisky from Sinuan.

One of the friends, a man I had not seen before, gave me a Thai massage on the porch outside the house. I was assured by the teacher he was a good man, so I didn’t worry too much, until Sinuan came home and kicked him out, telling me he was a “bad man”. Sinuan is not easily phased and seems to like and be liked by everyone, so I wondered what on earth had caused this. I found out later why I had not seen him before…he had just been released from prison in Mae Sariang. Definitely not my definition of a “good man” as the teacher had assured me! Moral of that story – never trust a drunk Thai man, even if he is your friend!

The next evening was relatively relaxed in comparison, just playing games with the kids, until Namsup decided to wee on me as I lifted him above my head. As you can imagine, I was not very impressed, but I had to laugh. Two nights later I was locked in the bathroom by Namchai just before she went to bed… I spent ten minutes banging on the door before anybody heard me and unlocked the door…for a brief moment I thought I might have been spending the night in there! Something I would not have enjoyed accompanied by the slight stench of urine, spiders and mosquitoes! The joys of living with kids…! 🙂 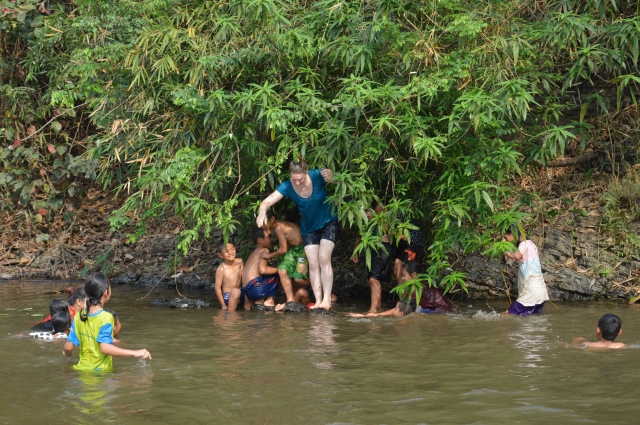 I have swum again at Hoi Ku Pah school. I have helped at one school’s Scout event and missed another; scouts being as much a part of school curriculum as any other subject. I have also taught the kids how to make origami cranes, bought British biscuits for them all to try (Digestives, Shortbread and Ginger Nuts), sung lots of songs together and have played volleyball with them. 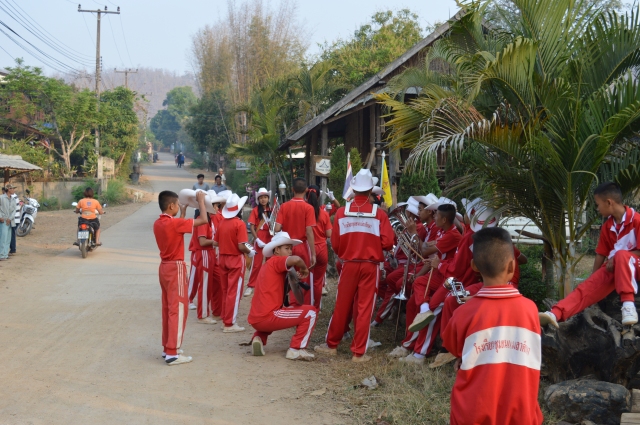 I witnessed a last minute Litter Pick in Santi Suk, ordered by the District Officer the day before and executed by the students and teachers. As always, nothing was done by halves and it was complete with brass band and students modelling recycled clothes. Teachers had stayed up to 3 am preparing. 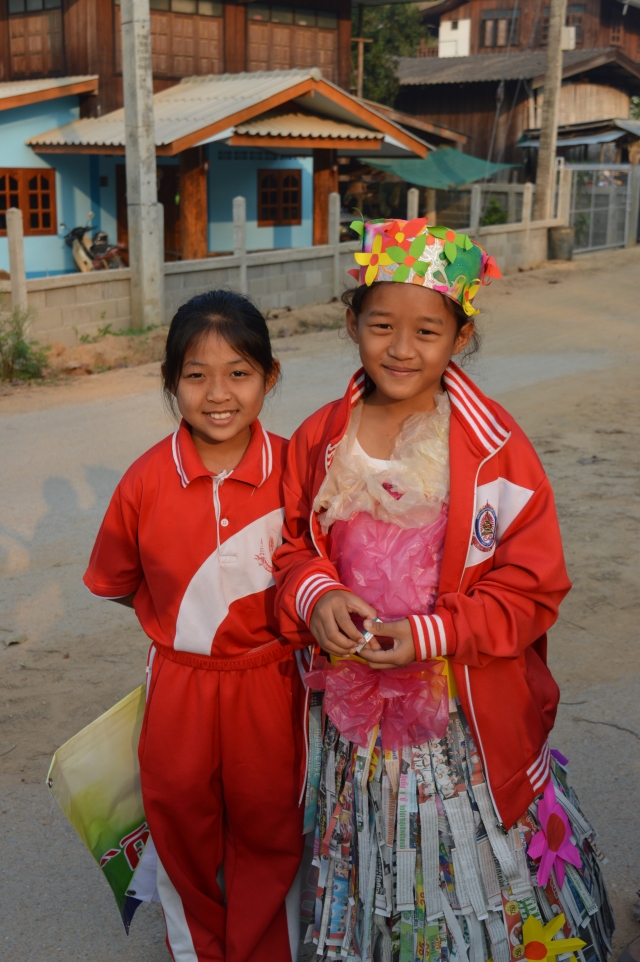 The Director of KHT, William, turned up yesterday at school with Salahe and Nootsabar, from the Khun Yuam office and another lady, Victoria, from the British office. KHT have paid for a new dormitory to be built and had come to take photos and update their information.

Last weekend was engulfed by the wedding of the old Headmaster’s daughter. She is 40, which is late for a Thai woman to get married. The celebration was huge and lasted from 8 am on Saturday morning to 7 pm on Sunday. In that time I helped make meatballs, shell garlic and clear dishes. I ate more than I could imagine and drank a lot of wine and beer. I danced a lot and even sang a song in Karaoke with the bride. The next day I was dressed in traditional Thai-yai costume, which I loved. Various guests tried to set me up with any available Thai Bachelors and had me posing for photos with them under the wedding banner. 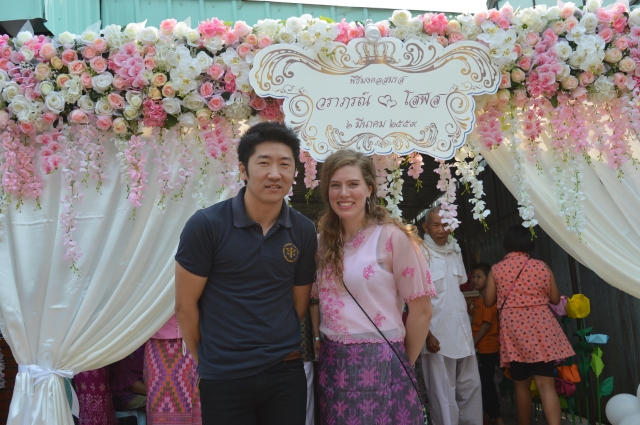 Somehow, amongst the wedding festivities, I even managed to fit a trip to the local Hot Springs with my fellow teachers and friends from Hoi Ku Pah school. I returned to the party (and drinking) in the early evening, smelling of sulphur.

At the Hot Springs

One night last week I ate ant eggs for my dinner with Sinuan. Another morning I was given pig’s ear soup for breakfast. A few days ago I found a small, black bird (alive) in the door of the fridge when I went to get water. Lipo had shot it, but not killed it. He was saving it to eat later.

The Viewpoint…designed with photos and selfie sticks in mind…

I have been to the local viewpoint and to the rope bridge in Mae La Luang for the first time this week, which links the village with the paddy fields on the other side of the river. I ate Thai omelette/crepe with my legs dangling over the edge and learnt how to make an origami fish from coconut leaves. I saw another snake. I also saw a poisonous but beautifully multi-coloured lizard. 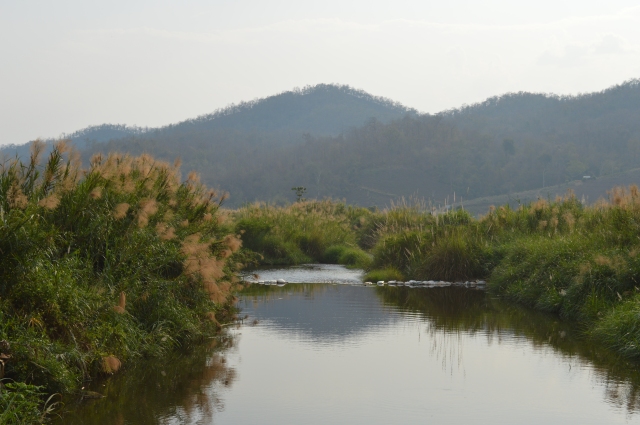 The View from the Bridge in Mae La Luang

Last night I went to Mae La Noi with Cru Aew and her daughter. We ate delicious fried fish in a little wooden restaurant. It was a little goodbye between us, and a thank-you from me, as she has looked after me so well while I have been here. 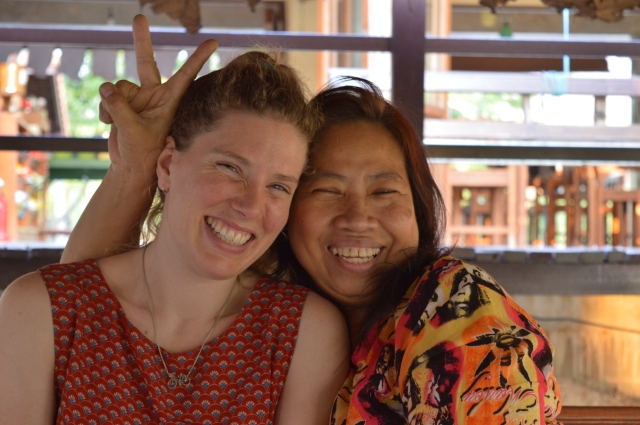 Me and Cru Aew

And finally…this morning I have seen my first eclipse; the moon slowly sliding past the sun. It was absolutely incredible though I was walking around with white spots in my eyes afterwards from too much sun!

Though I have no plans for my last few days here, I doubt that I will be bored!

This entry was posted in Living with Locals, Teaching English, Thailand, The Karen and tagged Culture, Hilltribes, Karen, Thailand, Travel. Bookmark the permalink.