Being the only “Farang” (Westerner) in the area is great, giving me a unique opportunity to immerse myself in local culture and practice Thai. However, sometimes it is tiring and I was excited at the prospect of a weekend away in Mae Sariang.

It is only a small town, and not particularly a tourist attraction in and of itself. However, it is the largest place on the southern road between Chiang Mai and Mae Hong Son on the popular “Mae Hong Son Loop”. As such it has plenty of travellers stopping for a night or two, enough in fact to warrant it’s very own “Farang Street” as the locals nickname it. It is the pretty road that runs alongside the river, complete with bars and cafes and hotels and restaurants. As tourist streets go, this one is lovely!

After a short minivan ride we arrived at 8am. Checking in to our lovely little hotel with a bit of Thai, the cost of our double room with private bathroom fell to just 400 baht (£8) and the owner gave us mugs of fresh green tea to warm up (it is still cool on a morning). A quick coffee in a nearby cafe gave us more opportunity to chat in Thai and we were soon sent on our way with a lovely little map with which to find the Golden Buddha, an enormous statue on the top of a nearby hill. 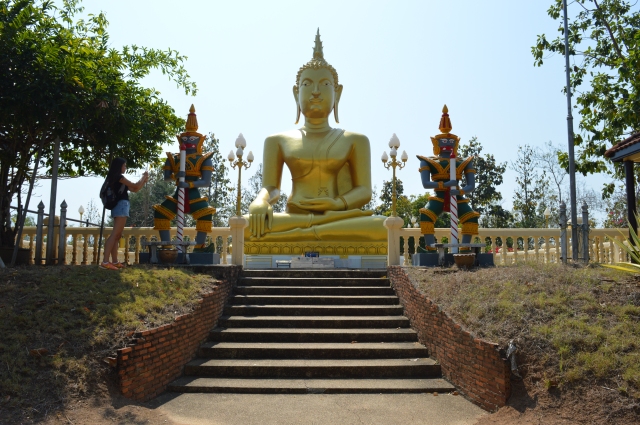 It was a beautiful walk out of the city through would-be-rice-paddies in the wet season, currently growing veggies, and finished off with a steep climb to the Buddha and a beautiful view.

The walk to the Buddha

Feeling refreshed after an iced green tea (this is something Thai cafes do extraordinarily well) we continued walking despite the mid afternoon heat. We crossed the river and started heading downstream alongside it. We were soon walking off road through more farmland – passing cows with enormous ears on route. It was the first time I had walked away from roads for any length of time and I was thoroughly enjoying the peace. The river flowed next to us and Maddy and I were happily chatting away. 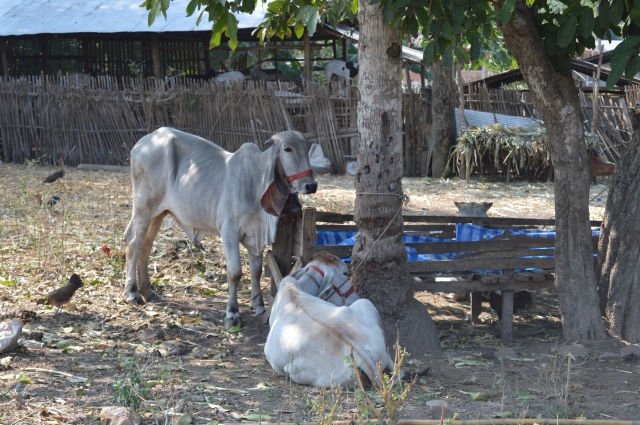 Ironically, just at that moment were talking about travellers who take risks and don’t think about the consequences. I suddenly heard movement in the undergrowth next to us and I glanced down.

It was about a metre long, cream coloured and disconcertingly, moving quite quickly through the undergrowth next to us, barely a metre from our own feet.

I didn’t have to think twice.

“OK, there’s a snake!” I said as I turned around and half pushed Maddy as she did the same. We walked away as fast as we could without running, hearts thumping in our chests and not quite able to believe what had just happened.

Moment before we saw the snake.

With the help of the internet, we discovered it was an Albino Monocled Cobra. A relatively common snake, especially in rice paddies near watercourses, a description which just happened to fit exactly our location. However, it makes it no less dangerous and I think it is only in hindsight I can appreciate just how justified being so afraid was.

Suffice to say when we got back to Mae Sariang in the early evening, we both fancied a beer. We sat in an amazing and quirky looking bar overlooking the river and our night started from there…and didn’t end until 12.30am!

Though perhaps I had been looking forward to a little farang company, wein actual fact spoke to only one other all evening, an 78 year old Aussie who now lived in Mae Sariang with his wife. We shared birthday cake with him and his friends and I was, once more, bowled over by generosity, especially of Thais.

Deng, an older local guy and friend of his, started chatting to us and soon was insisting he pay for our dinner and drinks for the evening – despite our protestations. It was 440 baht,a lot of money for a local Thai to splash out and he would not take no for an answer.

Such hospitality and kindness is shown to us wherever we go. Whilst it seems more plausible in the communities in which we work and are known, to receive such kindness from a total stranger, purely because we speak a little Thai and are volunteering here, continues to amaze and touch me.

On the edge of Mae Sariang