The Great Wall of China

It has to be China’s most famous historical feature and of course, I had to visit it. It did not disappoint, though it was my what I expected!

I set off from my hostel in the smoggy Beijing at 7am in an attempt to beat the crowds. It was a Saturday and a popular spot. I arrived at the wall itself just before 10am after a train, a bus, a taxi ride and a 45 minute walk. It was beautiful and, to my joy, almost empty of people.

What’s more, snow was falling. It did not matter that today was misty and I could not see the sun or a very long view, because what I saw was stunning. The wall snaking it’s way over all the snow covered mountains. Huge intricate snowflakes landing on my face. A Chinese man was singing beautiful opera into his camera as he walked along. It was pretty good way to see the wall.

I had heard it was possible to camp on the wall. Of course I had wanted to do this but, at the last minute abandoned my plan. I was glad. In temperatures of minus 15 my sleeping bag would not have been enough and with the combination of snow clouds and smog, there was no hope of watching a sunrise or sunset.

My backup plan was to simply how along the unrestored sections beyond the main tourist area around Mutianyu. In fact, this did not materialise either. Instead, something far better.

I was adopted by a Chinese tour group! 🙂 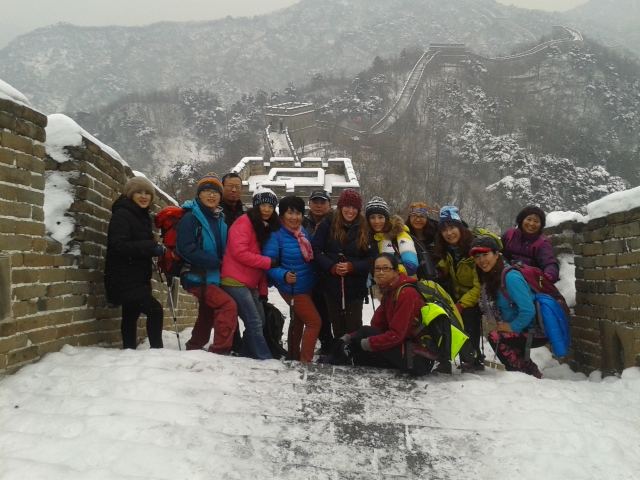 I had already walked most of the length of the wall over slippery steps covered in ice and snow. There was a single track that had been cleared of snow. Everybody was helping each other out as they slid and fell and somehow stumbled along the wall. A mass of people gathered around lunchtime by the cable car. Families with small kids deciding which way to go, or whether to go at all.

Some sections are surprisingly steep and in the bad weather verged on dangerous. People stopping for photos or finding themselves stuck on the ice soon created traffic jams of people.

I decided to turn around and start heading back to avoid the ever increasing numbers of people. A few minutes later I got stuck behind a huge group of Chinese tourists. They were dressed for an expedition, all in walking boots, thick ski jackets and all complete with walking poles and rucksacks.

Soon they decided that I looked helpless on my own and with an abundance of smiles and kindness they had grabbed my arm and thrust a spare walking pole into my other hand. Soon I was part of the group. We stopped every few minutes for photos and it was important I was in every one. It was much slower going than when I was on my own but a lot more fun.

Though I could not understand it, there was a lot of banter and laughter. It was infectious and soon I was laughing along to jokes I could not understand. I tried to ask them where they were from and what their names were but my Chinese is, unfortunately, unintelligible. Instead we managed to communicate with the help of Google translate. There was much laughter as I tried to copy their Chinese words and soon they were trying to teach me more.

It was great fun and even more so when we stopped for lunch in one of the watch towers. What an incredible experience. Their bags should have belonged to Mary Poppins, the amount of food they produced out of them.

A rug was placed on the floor and portable cushions, bowls and chopsticks were passed round to everybody, including me. A moment later everybody was producing the food they had brought. The selection was incredible. Steaming dumplings stuffed with beans and stored in big flask like containers were passed round. Hot chicken wings and drumsticks were shared. Shrimp soup with noodles was cooked fresh on gas stoves and poured into everybody’s bowls for slurping. I had planned to go without lunch as I had not had time to buy anything, so what an amazing feast!

I soon learnt the word for full as more and more food was produced and passed around. It really was like a massive celebration and I loved being part of it.

I walked with them a little further after lunch but soon had to leave them in order to catch a bus back to Beijing. I would have happily stayed with them longer otherwise! The Great Wall is a truly phenomenal piece of Chinese history, but without doubt it was the modern day Chinese that made my day so wonderful. 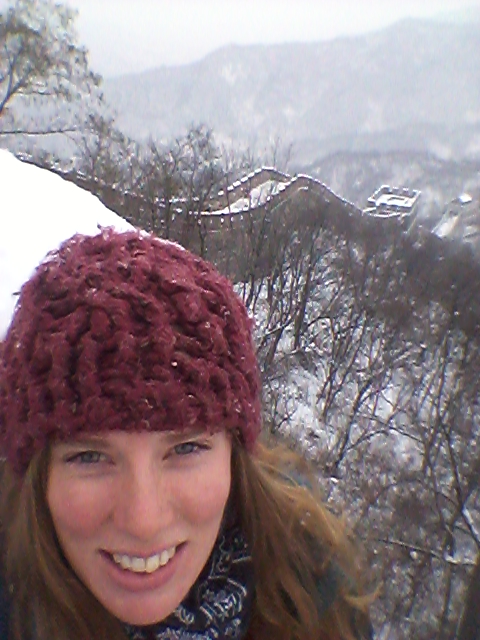 This entry was posted in China and tagged China, Culture, Great Wall, Travel. Bookmark the permalink.