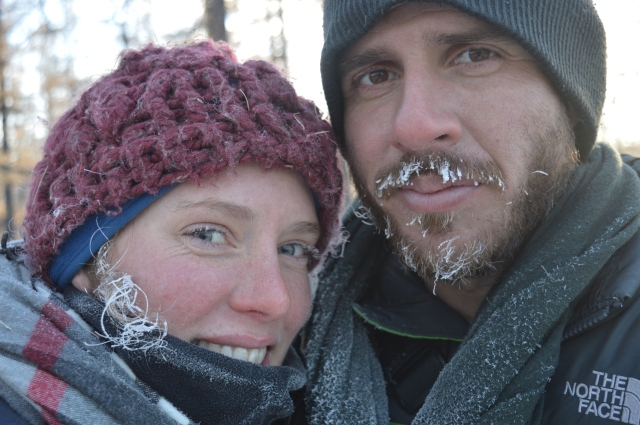 Frosted up in Mongolia

On Sunday I left the Tsaatan people, and after travelling together for a month, I also left Jordi. He is staying in the Taiga another week with the Tsaatan. I leave for China tomorrow.

Jordi is, and I’m sure anyone who knows him will agree with me here, quite an extraordinary man.

One person in Berlin told me, “He has a reputation here for being the happiest person alive.”

Jordi is a brilliant communicator and I think that’s why everybody likes him. He speaks many languages fluently, and a few more not so fluently. But even when he does not know a language he has an incredible knack for talking to people with the few words he knows and winning them over.

Whether we were squashed up on a bus, eating in a restaurant or staying with a local family, he always managed to communicate with words and actions in a way that had people laughing with him and trying to teach him more words.

Jordi also makes short films that are honest and true and you can watch them here www.nosolotravelchronicles.com

He is also incredibly generous.

There have been times when I would have felt very vulnerable alone and I was grateful to have Jordi with me.

When I accidentally made friends with a drunk man. When a lady in the supermarket shouted threats and abuse at us.

In particular, the night two drunk guys playing “knock-a-door-run” a little too forcefully literally knocked our hotel room door down. I woke up in the middle of the night to find Jordi pulling on jeans and charging out into the corridor after them. I thought we had been robbed. Luckily not.

The guys were kicked out of the hotel and at 2 am Jordi hammered our door-frame back together with a few nails and some wood. Just to be on the safe side, I dragged a sofa in front of it as well. In hindsight its quite funny. At the time I was glad to be able to hide in the room until the drama had passed.

Travelling as two brings different challenges to being alone. Two minds each with their own ways of doing things have to come together to form a single plan. Sometimes this was frustrating for one or both of us.

On my own I always end up chatting to random people. I wondered at first whether it would be harder to talk to locals as two but soon realised this was not the case.

And for the moments that otherwise I would have been alone, it was great to have someone there to chat to, to share meals and hugs with. Climbing mountains and eating a few raisins, chocolate and half an apple found in the bottom of my bag would not have been nearly as much fun.

All in all it has been an incredible joy to share the journeys and experiences in Mongolia with Jordi and I could not help but cry when we said our goodbyes.