How can I put the last ten days into a single blog post?

We, Jordi and I, have been living with a Kazakh Eagle Hunter, Ardack, and his family, in the heart of the Western Mongolian mountains.

Their house, built at the foot of a 3,900m plus peak, is a squat, white building. It is single storey and has a flat roof with a constantly smoking chimney. It stands alone in the wild landscape except for a couple of outbuildings. Though Ardack is a traditional Kazakh Eagle Hunter, his primary task is to look after his herd of sheep and goats. Every season they move to one of their four houses, affording their animals the best grazing they can throughout the year. They have a few neighbours, mostly extended family, each a kilometre or two away, with their own herds to tend to.

The land itself is phenomenal. Truly wild. We are more than 10km along a bumpy track from the nearest town, which itself is simply a collection of wooden houses and dirt roads. In every direction, snow-capped mountains with vast, wind-swept plains between them. There is a sense of endless space. Snow covers the rocky ground, patchy where the wind has blown and heaped it. The grass underfoot is brown, as if it has been burnt by the sun and yet, the air is cold, so cold in fact that the rivers and lakes around freeze.

Life is simple here, but not easy.

And for the most part, it centres round the animals. They provide almost all the work, and all the sustenance for the family.

Janerke with “Candy” the goat.

Every day the herd of sheep and goats must be tended to. The sarlacks (cows) milked. The horse retrieved from where it has wandered during the night and the eagle fed. The 15 year old dog survives from left overs. Water is collected and carried from the nearby stream daily. Animal dung gathered to feed the stove inside.

There are no fences, so every day the herd is taken to fresh pasture and minded throughout the day. Ardack and his son take it in turns, one day on, one day off. 10am until 6pm standing in the freezing cold, watching over the sheep. It is a very peaceful job. Hardly a sound in the air except for the nibbling of grass by hundreds of mouths. An occasional bird or mouse. But mostly, resounding silence. Alone with animals, I found myself thinking about nothing at all. 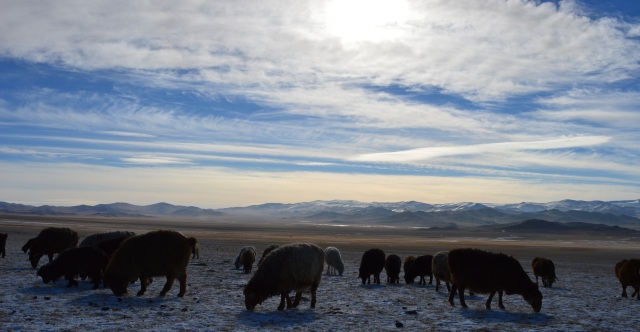 Living with a Kazakh family is no place for a vegetarian, and vegans would simply not survive. Except for a sack of flour a month and a handful of mountain onions, the diet is simple. Everything comes from the animals. There is usually just one hot meal a day in the evening. This is mostly meat, either goat meat or mutton or both. Normally boiled with handmade noodles or pasta. Always with salt and copious amounts of animal fat. Sometimes a few potatoes and onions are thrown in. In 10 days, two carrots were shared between 8 people.

The rest of the day, salted milky chai (tea) is drunk from bowls with Borsak. Borsak is a kind of bread, cut into bite-sized pieces and deep fried in lard. Fresh it is delicious, and difficult to stop eating, like chips. But it goes stale quickly and then it is best dipped in tea.

Sometimes, especially if there are guests, Borsak is supplemented with a variety of treats, all made from milk. I was astounded at just how many different things milk can be used to make; butter, cheese (although not how you and I might think of it), curd (a hard, tangy substance that looked like fudge but tasted nothing like it), yoghurt, sweets (sometimes bought candies and sometimes homemade from animal fat and sugar) and countless more dairy products I did not even know existed until this week. Everything is a shade of beige and everything is added to the tea.

The Table set for Chai

Chai here is treated almost like a soup. You dip bread in it, put cheese in it or add more salt. It is not a sweet drink but it is drunk all day long. I hardly drank water in ten days, only chai. My poor stomach did not thank me for such an extreme change in diet and I could not stop eating fruit and biscuits when we arrived back into Olgii town last night. We were given a huge bagful of Borsak as a leaving gift. It remains in my bag, untouched.

Although I struggled with the change in diet, it is amazing to see how self sufficient the family is. They can, and pretty much do, survive without money. They sell some animals for extra income, and host tourists like ourselves, in order to buy wheatflour, sugar, salt, clothes, diesel etc. But mostly, the animals provide for them and cost nothing.

Roughly once a month Ardack kills a sheep or goat and once a year he kills an additional 10 for salting and curing. 20 animals a year provide food for a family of six; Ardack, 45, his mother “Apa”, 70, (Grandma), his newly wed son Nausbik, 22, and wife Altinjesh, 22, and his two daughters, Janerke, 17, and Akjon, 16.

It happened to be the time of year to kill the additional ten animals whilst we were staying. All the local nomad families do it, and it is a lot of work for one family to do alone. So, instead, they all help each other. In the space of 7 days, 40 animals will be killed at four different homes. Each family sending helpers to the others. We were present for two of the four days. It was intense and a lot of work.

Even if you are vegetarian, it is difficult not to notice how much these families appreciate their animals. The families are Muslim. Before any animal is killed, a short ceremony is held, where the family gathers together on bent knees in the snow to give thanks to Allah for providing food for them. The animals are then killed in the traditional way, cutting their throat to drain the blood as a prayer to Allah is sung, committing the animal’s soul to God.

The skin is removed and either used to make clothing or sold for a mere 1,000 tugriks (about 35pence). The carcass is hung from a beam protruding from the side of the shed and under Ardack’s skillful hand, it is reduced to cuts of meat in less than an hour.

The entire digestive system is removed and, bar a short section of large intestine, is completely cleaned and later eaten. It is labour intensive work for little reward, but the stomach is seen as a delicacy worth the effort. Other parts are seen as good luck for any woman trying to conceive. The head is also seen as a treat and we were given the honour of eating the ears on two particularly disgusting occasions. The drained blood is fed to the dog and the lungs to the eagle. Everything else is eaten.

The women cleaning the digestive systems of the ten sheep whilst the meat is salted and hung behind.

Clear gender roles remain in life in the mountains. Being a woman, I was encouraged to sit in the house and not to venture outside. Anyone who knows me will understand how frustrating I found this. Thankfully they did not take offence when I preferred to stand and walk in the mountains all day and soon I was even able to help look after the sheep, but after ten days, I began to understand why such distinct roles exist.

Survival here is a delicate balance, an art form that relies on each person in the family contributing. They cannot afford to have arguments about who does what or who gets what. Both Jordi and I were amazed how well everybody got on, despite living on top of each other and often seeing no one else in a day.

The family live in four rooms. The main living room contains the stove, a small knee-high table with two rugs beside it to sit on, a sink (not plumbed in but with a waste bucket underneath) and a cupboard. There is another living room with a large round table and four stools, which is used for important guests and doubles up in the evening as a bedroom for Janerke and us, as well as other guests when they stay.

The other two rooms are bedrooms. One, so called “the love room”, contains a double bed, and the newly-weds have the privilege of a room to themselves. The other bedroom contains three single beds for Apa, Ardack and Akjon, as well as lots of suitcases and bags piled up containing all the families clothes. There are no doors between the rooms, only doorways, so no privacy at all. 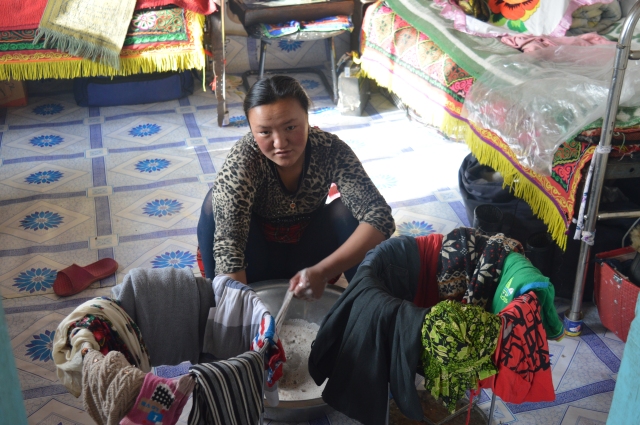 The women are very house proud. Every rug, floor, and surface is cleaned every day with soapy water. All the laundry is done by hand, frozen outside and then dried next to the chimney. There is no toilet. You walk outside and away from the house to do your business. Each person showers once a week, hanging up a rug in front of one of the doorways in order to afford some privacy for the naked person beyond.

Staying for only ten days, we were not given the luxury of a shower. I was, however, helped to wash my hair after just a few days with a bar of soap and a kettle over a bucket. The girls then plaited my hair and gave me a headscarf so I could wear my hair the way Kazakh women do. It turned out to be very useful, especially after a further 8 days without washing my hair.

It remains a very traditional way of life, and nothing makes it more so than the eagle itself. Keeping an eagle, or “Birkit”, is a millennia old tradition which is practiced by only a few hundred Kazakhs today, mostly in the Bayan Olgii province of Western Mongolia. There was something unsettling for me about how such a powerful, wild animal had been trapped just a few weeks prior to our arrival and was now kept in shed. She was an incredible, beautiful creature. Ardack was just beginning the process of training it to catch foxes, hares and rabbits, perhaps even a wolf, whose furs he will later use or sell to supplement their simple lifestyle.

Father and Son Training the Eagle 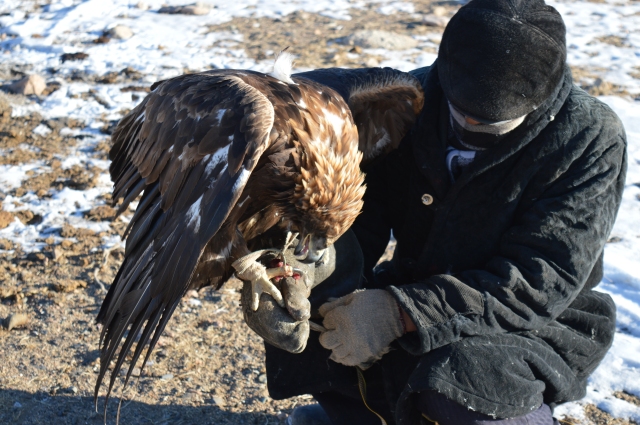 Today, I cannot help but wonder if the art of hunting with an eagle is more of a tourist attraction than a useful skill, but Ardack remains proud of his beautiful Birkit. 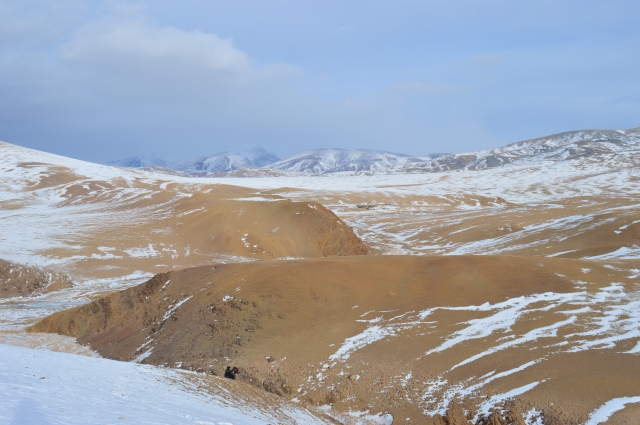 Ardack waits with the Birkit in the mountains, watching for a fox.

The Eagle flies to Ardack.

Jordi will be making a documentary about the time we spent with the family, due Spring 2016. Check out the trailer here: http://nosolotravelchronicles.com/

1 Response to Living with Kazakh Eagle Hunters in Mongolia